A Day on a Mountain Gorilla Photography Workshop

A Day on a Mountain Gorilla Photography Workshop

The experience of photographing Mountain Gorillas, shared by two participants of our Uganda photo tour

In January, William Archer and Linda Webster traveled to Uganda to join us on a wildlife photography workshop. The highlight of the itinerary was, undoubtably, two days of venturing into the jungle of Bwindi National Park in search for the highly endangered Mountain Gorillas. Here’s an account of their Uganda photo tour experience – and some of their best images.

In January of this year we were fortunate to join a Penda Photo Tours trip to Uganda, led by photographer Kaleel Zibe, which included two days of Gorilla Trekking in The Bwindi Impenetrable National Park. The treks were an incredible experience in which we were able to hike into the forest and get close and intimate with Mountain Gorillas.

The Mountain Gorilla is one of two subspecies of the Eastern Gorilla and only around 1,000 of them remain, divided into two populations. One population lives in the Virunga Mountains which straddle Uganda, Rwanda and the Democratic Republic of the Congo. The second population can be found in Bwindi (BINP) and these are the gorillas which we sought out.

Mountain Gorillas have shorter arms and thicker fur than their lowland counterparts and they are on the list of critically endangered species although recent conservation efforts have resulted in stabilization, and even growth, of their population. Today there are around 1000 of these beautiful animals in total. Attempts to breed these beautiful animals in captivity have failed. In fact, none have even survived in captivity so preservation of their natural habitat and conservation of these gorillas is critical. 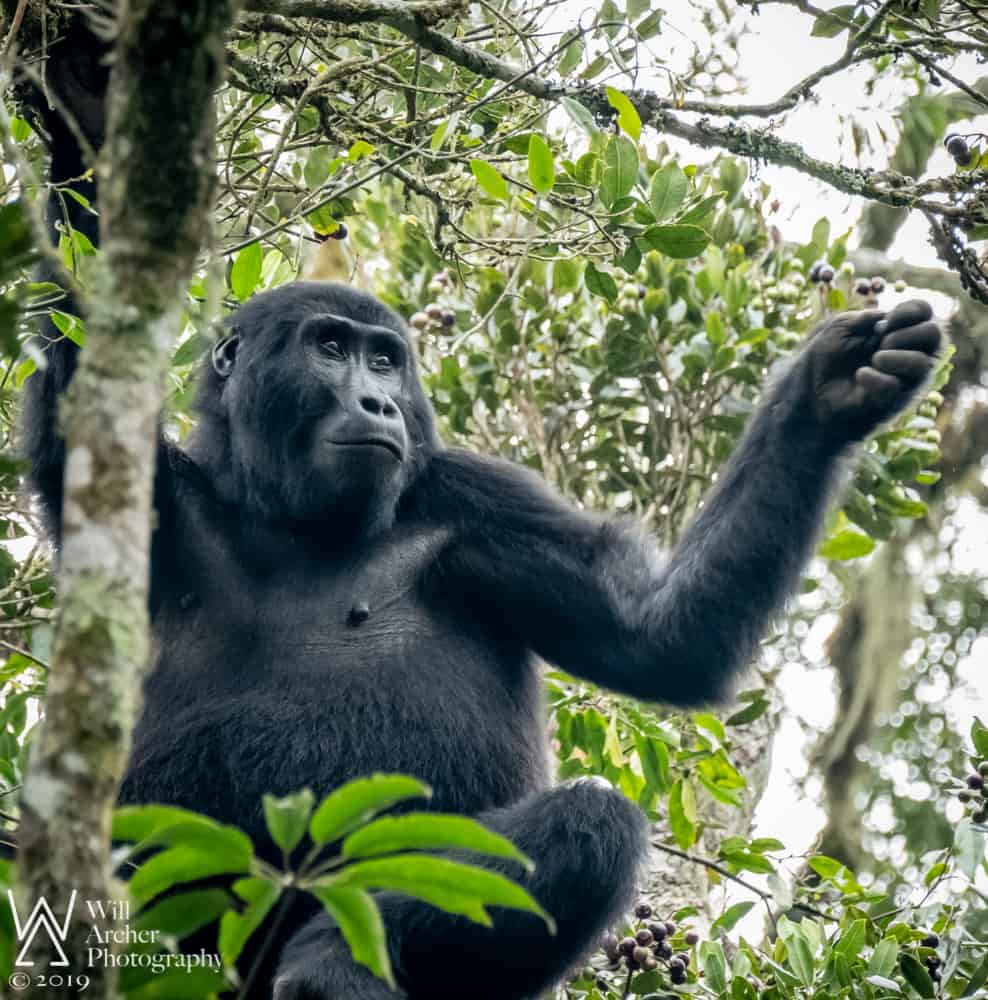 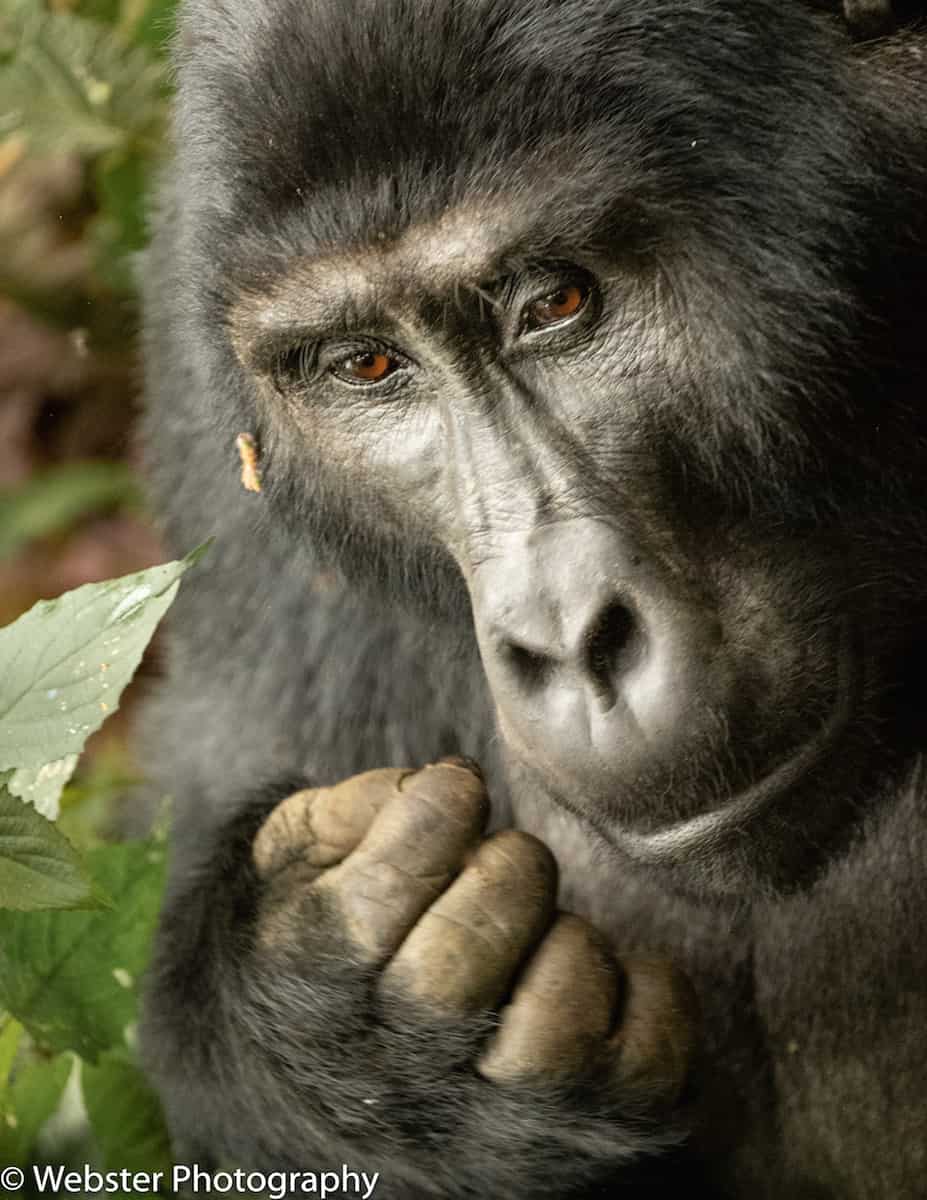 We undertook two jungle treks on consecutive days and the fees which we paid are used to help in the conservation efforts. Some of the gorilla families have been habituated so that they have become used to humans, which makes the visits possible. Others have been kept more remote to ensure that they remain wild and are protected from human diseases and other possible side effects of human interaction

We signed up for two days of gorilla trekking because we thought that would maximize our chances of getting close to some gorillas and of capturing some great photographs. We are so glad that we did two treks as they were very different in several ways, including the fact that we saw a different gorilla family on each of the two days.

Each trekking day began with a pre-sunrise drive from our lodging to the assembly point at a National Park visitor center, high in the mountains. At the visitor center we were briefed on how to behave around the gorillas; don’t approach them within 7 meters (it’s ok if they come towards you), no food near the gorillas, no hiking poles or sticks when near the animals and coughs and sneezes to be directed away from them.

After the briefing, we were treated to singing and dancing by local groups and then we were assigned to our trek leaders and the gorilla family which we would visit that day. This is also when we were assigned porters, if we requested one, and the majority of people did. These porters carry your rain gear, extra equipment and much needed water and any food that you might take. They also act as support when climbing or descending steep hills in the jungle. We highly recommend engaging the services of a porter as these treks are very strenuous and it is nice not to have to carry a heavy pack. 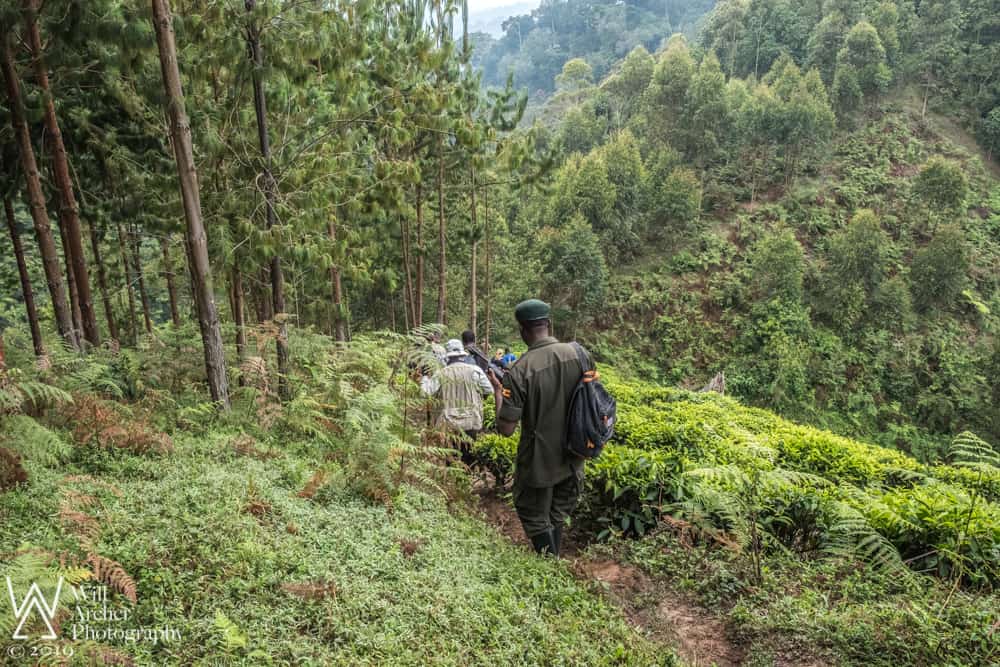 Each trek had 6-8 tourists plus porters and guides. There was also an armed guard ready to ward off any aggressive forest elephants or other dangerous animals that might cross our path.  Once everyone had been assigned treks we headed off to begin the hike in search of gorillas. In some cases, this involves a ride to the trailhead and in others a short hike to begin the trek.

So off we went full of anticipation. On day one we went in search of the “Oruzogo” group of gorillas, a family of 19 gorillas of all ages from immature up to and including several adults, named after their silverback leader. Advance trackers had gone out into the jungle early in the day to find the group, beginning their search at their last known location. The trackers maintained radio contact with our trek telling our trek leader where to go.

Our trek began in a tea plantation and then switched to a fairly typical hiking trail but before long the trail ended and we headed deeper into the jungle, led by our trek leader who was hacking the way through the undergrowth with a machete. We navigated uphill and downhill through thick tangles of vines, ferns, thorns and roots, heading in the direction where the group of gorillas had been spotted. Add in the fact that elevations in the park range from 1,190 to 2,607 meters (3,904 to 8,553 ft), these treks can be very challenging.

We were informed that the Oruzogo group had been spotted but that they were continually moving through the trees. We picked up the pace as best we could and eventually caught up with the gorillas, some on the ground but most in the trees eating berries and spread out over quite a wide area. Once we had caught up with the gorilla group we excitedly began to take photographs. 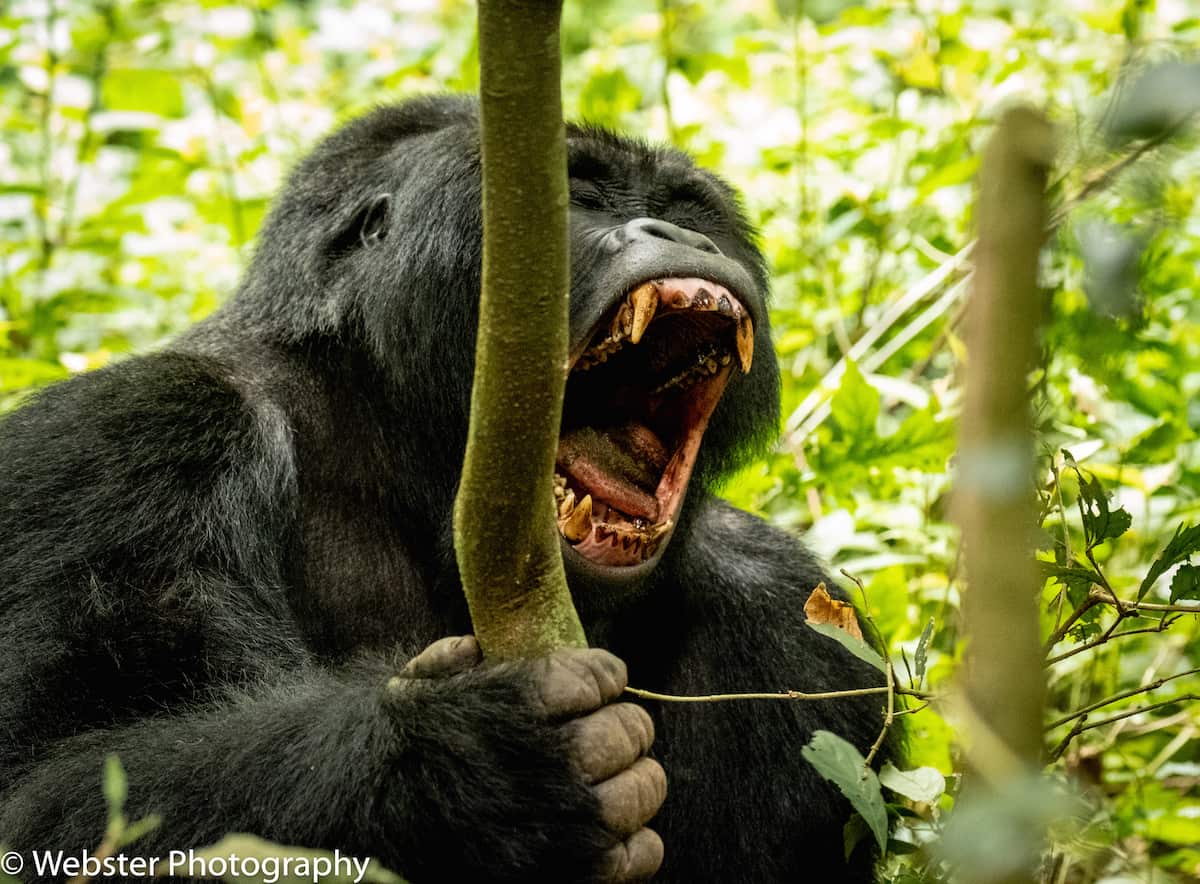 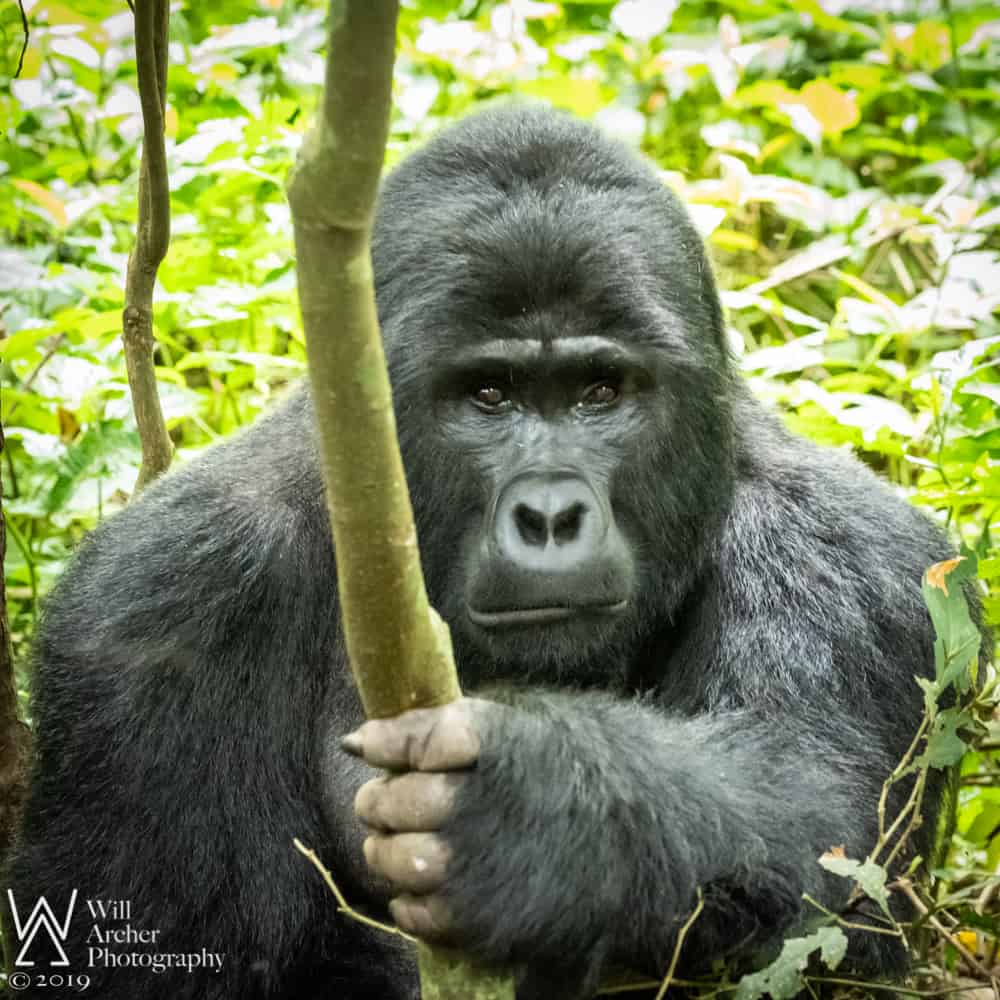 On this particular day, the Oruzgo gorilla group was actively moving as they foraged for food. This presented the challenge of capturing photographs of moving subjects in a heavily forested area so we had to be patient and anticipate where the gorillas were heading so that we could try to catch them in more open areas. The gorillas on the ground were somewhat easier to photograph as they were nearer to us and there were more clearings in the jungle.

The Challenges of Gorilla Photography

The gorillas in the trees presented a number of different challenges; They swung from tree to tree at higher speeds, they were a long way off and many times they were back-lit. Camera settings required sufficiently high ISO to allow taking shots at a high enough speed to ensure that moving gorillas were not blurred, and, for the gorillas high in the trees, we used exposure compensation to ensure that the darker gorillas were adequately exposed against the much brighter sky. Treks are allowed to spend no more than one hour with a gorilla group on any given day so once the hour was competed we headed out and made the trek back out of the jungle. 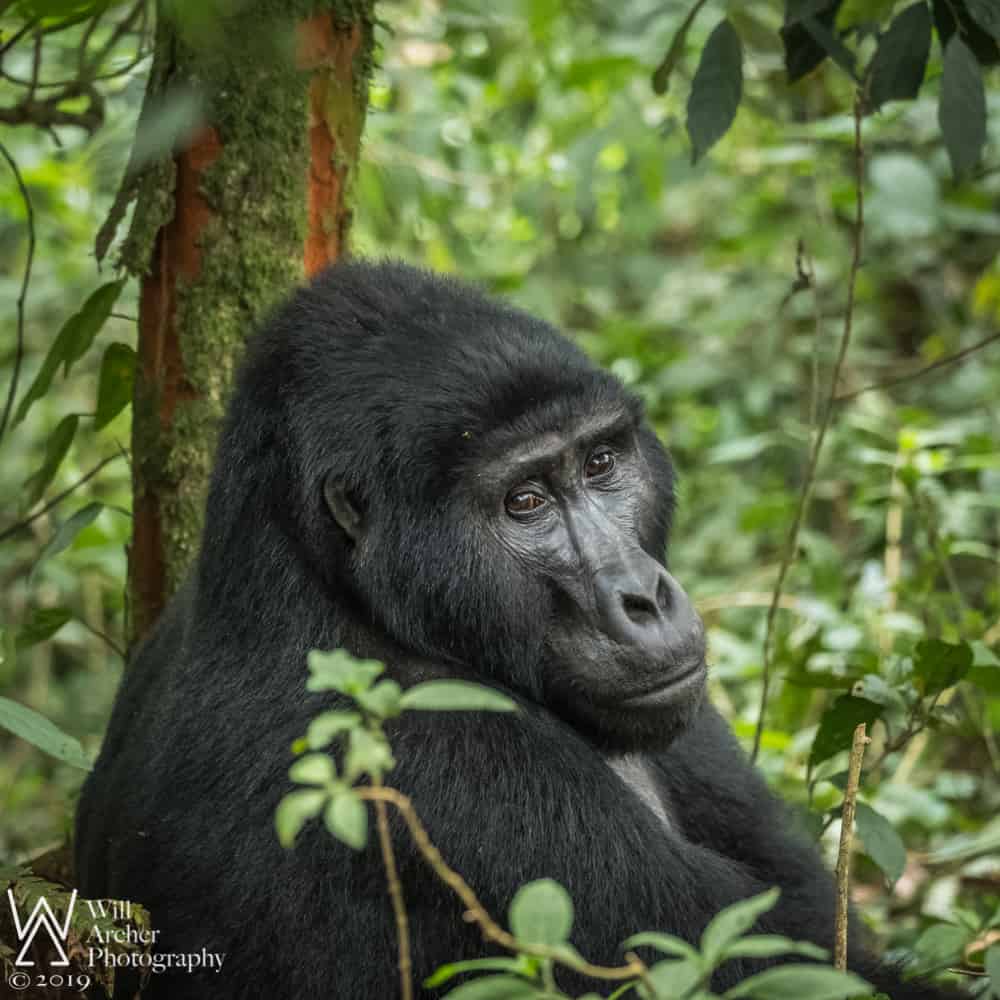 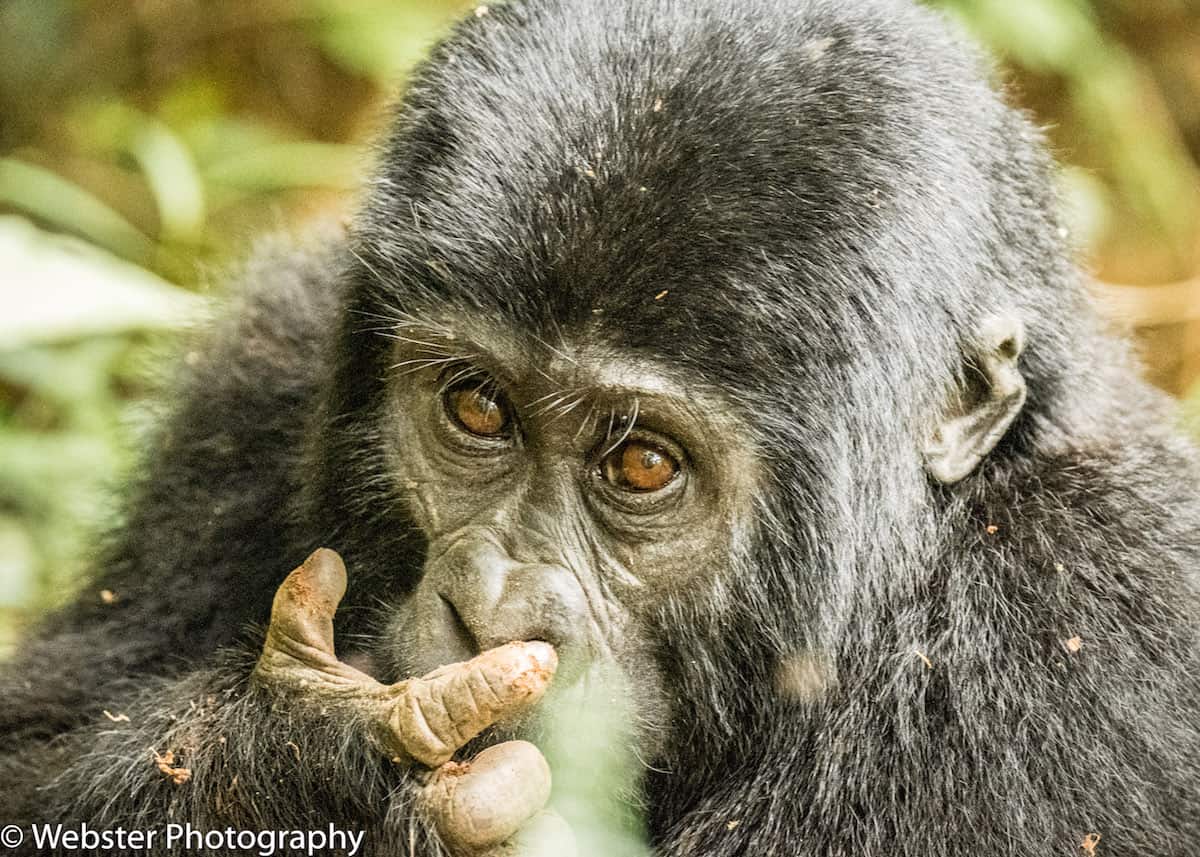 For our day two trek, we were assigned to the “Mukiza” group, again named after their leader. This group is smaller, consisting of 12 gorillas including two infants. For this trek, we first took a short drive to a trail head from where we began our hike. This time we began by hiking down through a somewhat open forest along a well-worn trail. We were all commenting how easy it was going down but reminding ourselves that the return trip uphill would be much more strenuous.

After a couple of miles, we received word that the Mukiza group had been located so we headed off the trail with our leader again hacking the way through the dense undergrowth. This time we hiked down a very steep slope covered in bracken. It was a challenge to stay on our feet due to the damp, slippery foliage on the ground.

Once we reached the valley floor we had to climb back up the other side which was, again, steep and slippery. Unfortunately, some of the members of or trek this time were less able to negotiate the terrain and also needed to stop for frequent rests. This resulted in us having to make a longer trek because as we were moving towards the gorilla group, they kept moving ahead of us. We did, eventually, catch up with them and, to our delight they were all on the ground and very close to us.

On this occasion, the heavy undergrowth meant that it was quite dark so cameras had to be set at very high ISO (12,800 typically) in order to attain a reasonable shutter speed. But the proximity of the gorillas was amazing and the interactions of the infants with the silverback, the mothers and their surroundings was enchanting.

With the gorillas so close longer zoom lenses were often too long to allow a wide enough angle for the shot so this is where the second camera with a wider-angle lens came into play.

Observing Gorillas from Up Close

At the end of each trek certificates of completion are handed out and a feeling of immense satisfaction and amazement descended over us. We were also very tired after 6-8 hours of hiking over rough terrain and through dense jungle. Each of our treks was about 6 miles in length but it was worth every step. We felt truly blessed and privileged to see what we had seen.

The gorillas are wonderful animals and to see them up close is a fantastic experience. Being able to watch them interact, from the watchful eyes of the silverbacks, to the nurturing of the mothers to the playfulness of the young, it is all beautiful. Even as exhaustion sets in after a vigorous trek, there is an immense satisfaction to accompany it and a smile as we remember where we have been and what we have seen.

The overall experience was quite different from what we expected. We were prepared for the trek itself but, based on Will’s previous experience trekking in Rwanda, we expected that the gorillas would stay together as a group and would be more in the open. Having 2 cameras with the capability to shoot up both close and at a distance definitely helped. Decisions had to be made quickly and sometimes you had to compose to include foliage because it ws not always possible to get a clean, unobstructed shot.

Linda’s favorite photograph is one of the black backs of the Oruzogo family. “I love this photograph because it captures the humanness of these amazing animals. I was particularly drawn to their eyes and hands. The way they used their hands was truly magical and, so much like our own. I definitely felt a close bond to these animals. 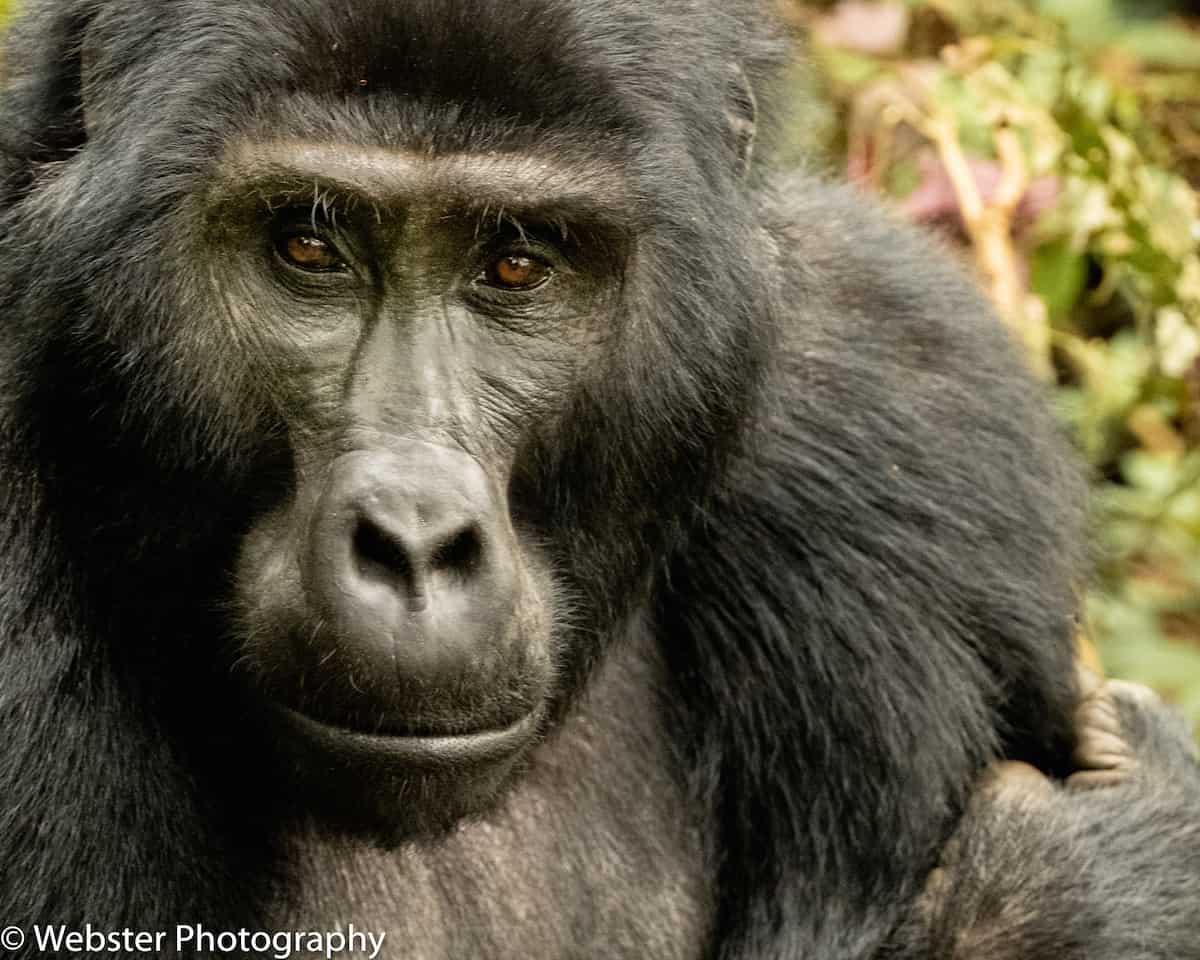 Will’s favorite photograph is one of Mukiza, the silverback of his family. “I love this photograph because, for me it illustrates both the tenderness and the strength of Mukiza. The strength is visible in his shear size and in the definition of his muscles and yet there is such tenderness in his eyes as he watches over his family group, especially the infants. During our visit Mukiza found time to play with his infant children while also looking out for the safety of his family. At one point one of the infants was playing in the trees and in the leaves on the ground and Mukiza was grunting what sounded like approval. Later the same infant climbed on Mukiza’s back and hitched a ride. We saw some very tender, and human-like moments.” 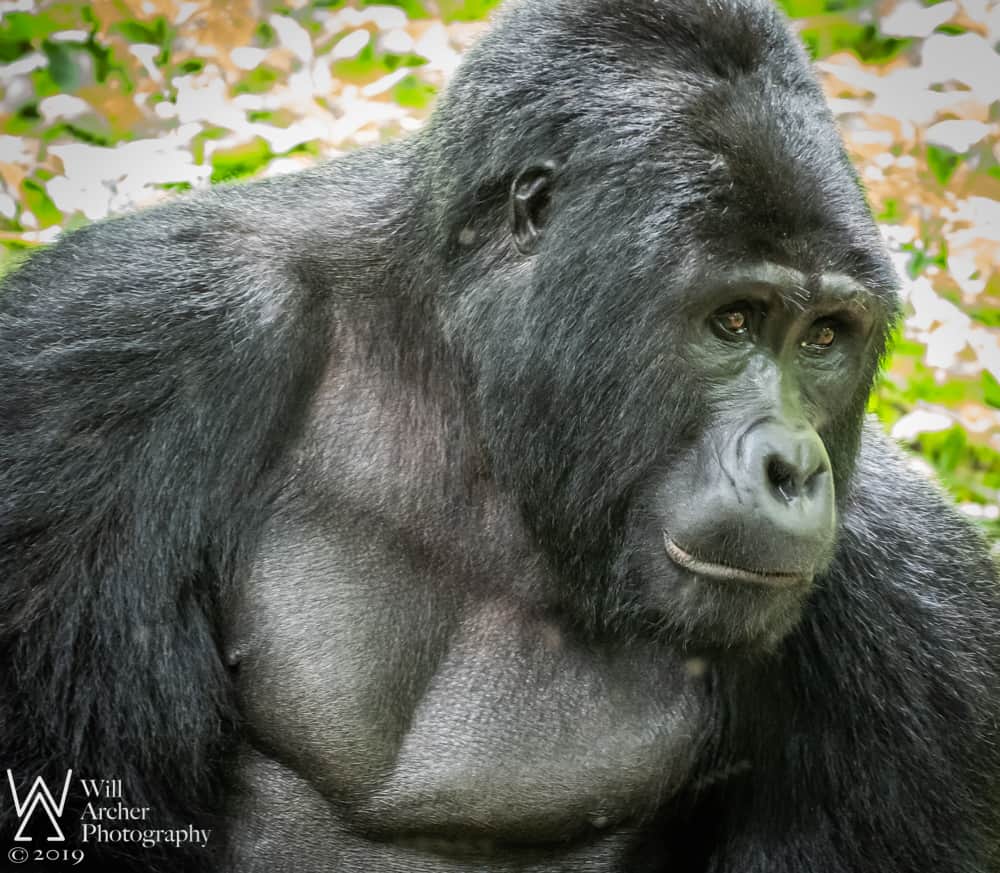 We both carried two cameras, or at least the porters carried one most of the time. We consider it essential to have the two cameras, with two different lenses, one for closer subjects and one for more distant subjects. On trek 1 the longer lens allowed us to zoom in on gorillas in the trees while on trek 2 there were times when the longer lens could not be backed off far enough to capture the subject. Changing lenses in the jungle is not recommended unless you have a lens changing bag and, even then, it is risky from the humidity and dirt perspective.

Ready to pick up your camera? Check out other photo tours and workshops!