An Inside Look into the Black Mambas

An Inside Look into the Black Mambas

How an Unusual Anti-Poaching Unit is Protecting Game with Grit

In March 2017, wildlife photographer Alan Hewitt was visited the Black Mamba Anti-Poaching Unit in South Africa, before running one of our photographic safaris. I was able to travel with him to get an inside look at this amazing organization. – Text by Regina Muller, images by Alan Hewitt

Traveling through Hoedspruit and the Greater Kruger Area to the heart of the bush, Alan met Craig Spencer, founder of the Black Mambas, at their headquarters in Balule Reserve. With his barking voice, Black Mamba uniform, and three- legged German Shephard by his side, Spencer appeared more like a military general than community warden. His easy laugh broke the ice quickly, however, and throughout our entire interview he smoked what he called “baboon dung” from a wooden pipe. “We smoke whatever we can get our hands on out here”, he joked.

We first asked how and why the Black Mambas were established. In 2015 alone, over 1,000 rhinos were murdered by poachers for their horns. Spencer and his team of rangers were there to count the corpses and skeletons left behind, littered across hundreds of miles of private game reserves. It is a cruel act of violence to remove a rhino’s horn, whether the animal is dead or alive- but the shaping of society and capitalism plays its role in the commonality throughout Africa. 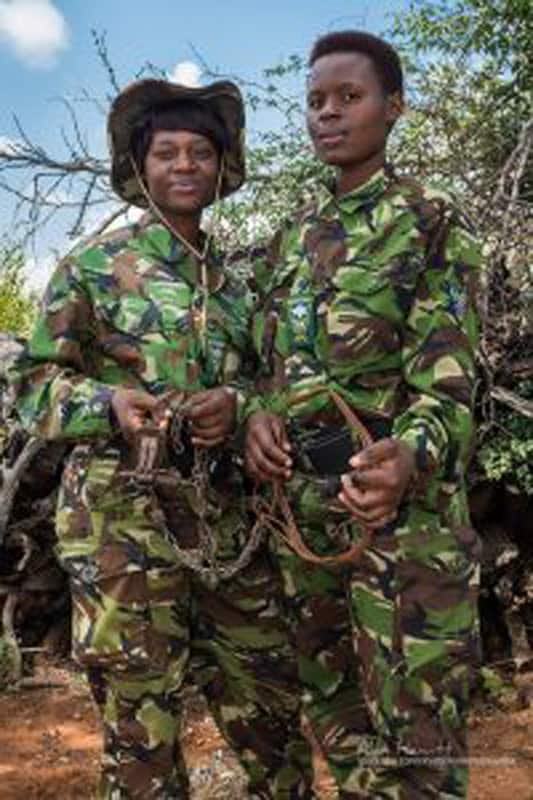 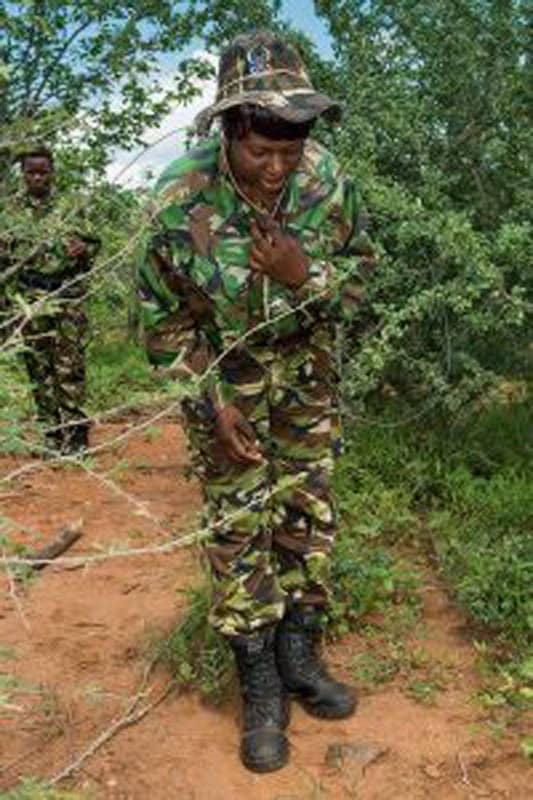 Local communities in the area surrounding Kruger National Park oftentimes have little understanding of the impact wildlife has on shaping the landscape. Education for primary students may include small lessons on endangered animals and conservation, but this ends by high school. Children who grow up minutes from game reserves- full of lions, elephants, zebra and leopards- have never seen any of these animals, or learned about their environmental impact. By eighth grade, students are starting to think about careers and ways they can provide for themselves and family. Job opportunities aren’t vast, and a known way for locals to make money is via poaching, or the illegal hunting of animals. There are two distinct forms in South Africa: meat poaching and ivory poaching.

Before 2015, meat poachers were camped all over private reserves. Cutting the fences surrounding them and making a way inside was easily done, since no one was patrolling gates with any frequency. The game reserves are extraordinarily massive areas of land- enough for all of the wildlife to live freely. Once inside, making camp and building a small kitchen out of wood was not difficult. With snares, the poachers could catch their game, and then cure it in the kitchen.

Snares are small webs of barbed wire, hidden in the ground. When an animal steps into its circular shape, it tightens, hooking into the limb. Any fight the animal gives will only make the wound worse, and the snare tighter.

Almost any animal that gets caught in these snares can be cooked for meat. Mostly they are set out for impala, kudu and wildebeest, but all different kinds of animals become captured. Sometimes even leopards and lions. The poachers will use the kitchen they built to cook & cure the meat, staying at camp for almost a month until it is finished.

Ivory poaching in Africa is most commonly the hunting of elephants and rhinos for their tusks or horns. The production of some traditional Asian medicine requires the keratin and ivory found in them, begetting a massive profit in the Chinese and Japanese black markets. Along with most of Asia, these countries have recently undergone an economic boom. The average citizen has money to pay for ivory medicines, whereas before they were selectively produced for the wealthy. Despite the fact that these ancient techniques scientifically yield no health results, the chain of supply and demand continues- raising prices for ivory as it becomes more and more dangerous for poachers to attain it.

Poaching for ivory as opposed to meat is much riskier in more ways than one. In most cases, guns are being used as opposed to snares. The poacher will find a place in the bush to hide, and shoot when given the best opportunity. Unless killed by one shot, both elephants and rhinos are likely to fight back once attacked. Despite the dangers, selling ivory yields a massive profit, so for some the crime is worth the risk.

The Start of the Mambas

Once the number of living rhinos and elephants was calculated, South Africa became aware of how extreme poaching had become. Spencer and his team of rangers took action by establishing the Black Mambas. All of the reserves in the surrounding area were to be scoured for camping poachers. It took about a month for them all to be located, removed and arrested. Their crimes landed them up to 18 months in prison.

To keep the vast area clean of poachers permanently, a guard unit had to be initiated. Spencer’s ideology of how to fix the problem of poaching involved changing the mindset of the locals. During his interview, Spencer described the principle in the story ‘Robin Hood’: to steal from the rich and give to the poor. This story resonates with poachers. They are Robin Hood, taking animals from rich tourists who come to travel and spend money and giving what they make to poor families in need.

The problem behind this way of thinking is that the animals are local wildlife. These animals are unique and extraordinary, and should be revered by locals as their own! Poachers are just people making money out of a skill life has taught them. If education is spread, and people understand how important it is to not let animals go extinct, the crime will slowly stop.

In most of the communities surrounding Kruger, it is the women who take care of the family- the elderly, the sick, the children. If these women also became bread-winners, they could provide for their family. If they were taught conservation education, they could spread that knowledge throughout their social circles. So, Spencer hired all women from surrounding communities to become the first Black Mambas. 6 brave, courageous and honorable women decided to take this very dangerous job, move away from their families and fight against crime all while camping out in the bush. Today, there are 26 all-female members, and 23 armed guards to support them.

“I have two kids. And I want them to know those elephant and those rhinos and those animals- not to see it on TV or in a magazine. So I save this environment for the next generation.”

One of the women interviewed, Cute Mhlongo, described her training as ‘the American show “Survivor”’. With an already-trained ranger, the women preparing to become Mambas go camping in the bush for 12 days. During this time they learn everything about the local wildlife and their behaviors, how to monitor and record data of endangered species, how to use firearms & first aid, how to camp in the bush with little to no comforts from home, and how to spot any poaching activity.

Since 2015, hardly any ivory poachers have dared break into Black Mamba territory. This is most likely due to another of Spencer’s ideas: he wanted the Mambas to be proactive, not reactive. Meaning, he didn’t want his guards to hide in the bush and catch unsuspecting poachers. He wanted the guards to be clear as day while patrolling for everyone to see- so no one dares trying to break into the reserves in the first place.

However, the Mambas do undergo training in case poachers break in and fight arrest. If anyone is spotted with a gun, the Mambas instructions are to hide, and return unseen to safe ground where they can report back. This way, armed military can know where the poachers are to arrive on the scene and arrest them. Black Mambas are not armed with guns; only handcuffs and pepper spray. They are trained to use the spray and self-defense on meat poachers, who are generally armed with knives. Once disabled, the meat poachers can be handcuffed and the Mambas can call in military and police back-up to complete the arrest. During Mhlongo’s interview, I asked her what she felt proud of about her work. She answered, quietly yet profoundly, “I’m not proud to arrest a poacher. What I’m proud of is if there is no more poachers. I have done my job. And if I patrol the fence…. maybe three months, and no poachers come into our reserve, I know I am doing my job well. So that is what I am proud of.”

“Our daily job is to patrol the fence…and to sweep. To sweep is like you are going in the bush, looking for a snare.”

Day and night, the Black Mambas job is to patrol the fences of all reserve areas where it is known a rhino or elephant is located. All of the animals are monitored and tracked, so they can be defended from poachers at all times. The Mambas also look for spores- which are footprints or evidence left by poachers. If spotted, the reserve with suspected activity will be alerted, and any rhinos or elephants inside will be closely monitored. It’s an amazingly niche way of working. Mhlongo explained that “…As the Black Mambas, we wear the same boots. And we know each and every spore of us there in the fence. And no one is allowed to walk there except us and the rangers. And we know the rangers boots. So If I see suspicious spores… this doesn’t belong to us. We will follow it….”

During the day, units patrol by foot, by night they go by car. It is a never ending job, both dangerous and relentless. Letting their guard down for even one night can provide an opportunity to poachers, which is a huge amount of responsibility.

Meeting and getting to know these women was an honor and privilege. We hope you enjoyed this inside look into the Black Mamba Anti-Poaching Unit of South Africa.

“I think…all of us- I don’t mean South Africans, all of us, all the world, we must fight together…. Because if we stand together to protect these animals, no one can come to poach.”

To find out more about the Black Mamba Anti-Poaching Unit, or contribute to their efforts, visit their website.