How to get the best tusk photo; and how to make it count for elephant conservation

No one needs an elephant tusk besides an elephant. Greed, however, has led the human population to believe differently for some time. Between 1979 and 1989, just one decade, half of all African elephants were wrongfully murdered in the name of ivory trade. When processed and polished, ivory is a beautifully smooth and perfectly white material. Its use indicated exotic wealth that many people couldn’t resist. Piano keys, billiard balls, chop sticks, jewelry- all have been produced with elephant tusk ivory in human history. Between the years 2002 and 2011, the elephant population was again massively reduced- this time by a horrific 62%- so man could flaunt its tusks as materialistic objects.

Today, many people around the world have accepted the brutality behind their material need, and have tried to put a stop to the ivory trade. A world-wide poaching ban is now thankfully in place. However, as you surely know, making something illegal doesn’t stop all people from committing atrocities. Since the ban, prices for elephant tusk ivory have soared even higher, making the commercial gain behind poaching even more drastic.

Join us on a photo safari to become the best wildlife photographer you can be!

So what can you do about it? If you aren’t trained in an anti-poaching unit, there isn’t a whole lot. What relies on you, on all of us, is spreading the word. Tell everyone- spread statistics, spread the horror.

A practiced and assured method of gaining a person’s attention, particularly via social media, is beautiful photographs. Elephants are an amazing species, an absolute pride of African safaris. Photographing them is a privilege and an art. Close up tusk photos are an interesting and original composition- one you can use to advance your photography skills, and get the attention of your followers for a meaningful cause. Here are three ways you can achieve amazing and unique close-up elephant tusk photos. 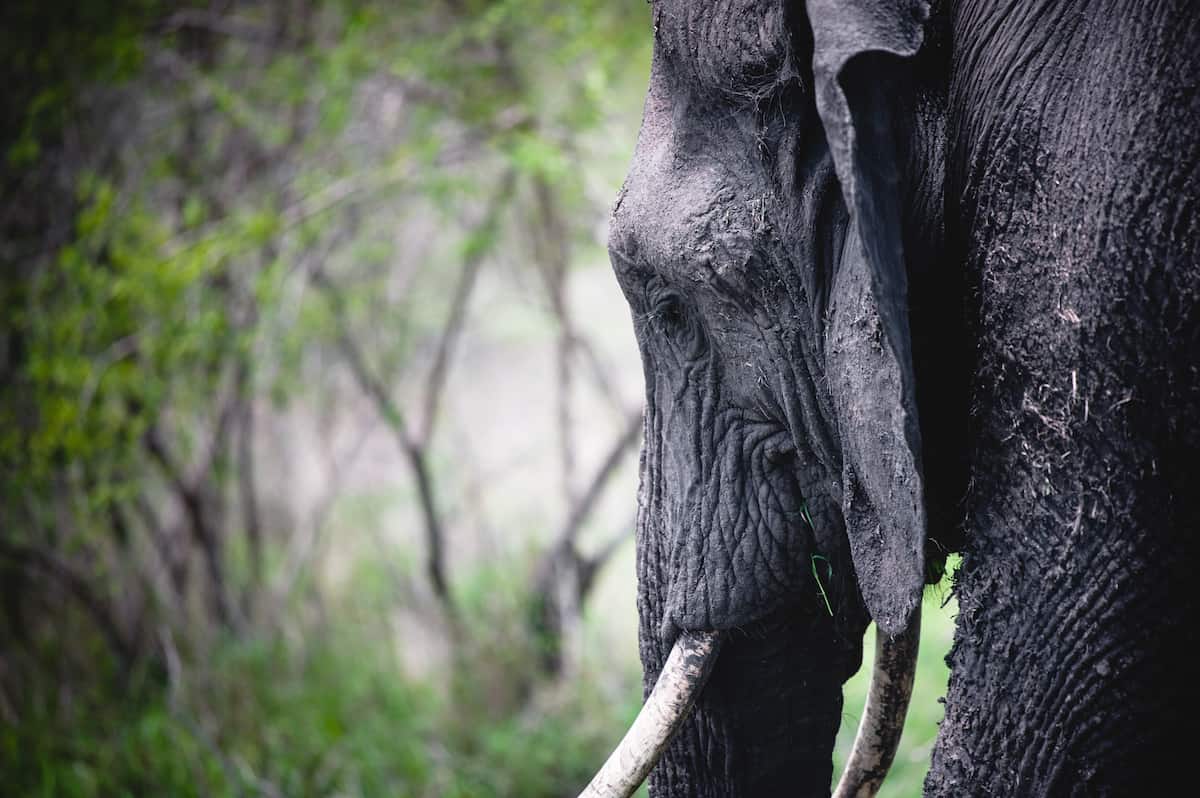 The aperture refers to how wide the blades in front of your camera lens open when taking a photo. The different size openings are called “f-stops”. The wider the aperture, the more light strikes the lens, resulting in a brighter picture. A photograph’s depth of field, or area of the image that is in perfect focus, is determined by your use of aperture. A small opening means a darker image but a broader depth of field.

Our first interesting perspective to try on a tusk photo is using a wide aperture, resulting in a very small area being in focus. Elephant ivory has a distinctive pattern called “engine turning” unlike that of the walrus or hippopotamus. The striations, or linear indentations on the tusk, form a delicate diamond pattern as furrows intersect. With a small aperture and close-up view, you can capture the largely unseen beauty of such a graceful and natural texture.

Shutter speed refers to the amount of time- generally a fraction of a second- the aperture stays open. This is another way DSLR cameras control the amount of light touching the sensor. A fast shutter speed, let’s say 1/320 of a second, is able to freeze and capture motion in your photograph.

A slower shutter speed, for example 1/30 of a second, will allow for more light, and also capture any movement in the image as a “blur”. For this reason, if you are using a slow shutter speed, it is imperative to use a tripod! You may not notice, but the miniscule movements your hands and arms make while holding the camera will be captured when using a shutter speed longer that 1/60 of a second.

What are the benefits of using a slow shutter speed? Incredible focus, as long as you shoot with a tripod. Our second unique perspective of shooting a close-up elephant tusk photo is using a long shutter speed. This shot will not be easy to capture- if your subject moves during the time of exposure, your image quality will be less than perfect. But the challenge is what makes it exciting, and why succeeding will result in extraordinarily one-of-a-kind images! 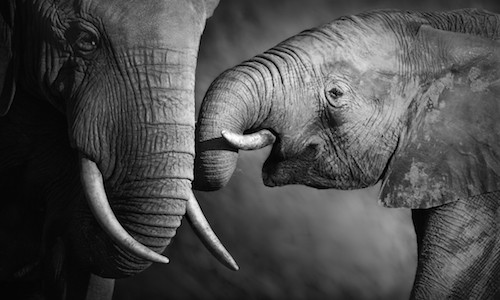 A camera’s ISO refers to the amount of unnatural light technologically created inside the DSLR. Using a high ISO, such as 800, can be very useful when photographing in dark locations. The fallback, however, is that a high ISO can result in a grainy- or “noisy”- image.

Often, when on a photo safari, game drives are early in the morning or as the sun is setting. Our final interesting way to photograph elephant tusks involves going out at mid-day, when the sun is at its highest point. Generally, this isn’t the best idea for photographic composition, because it can cause areas of your image to be too light, or whited out. However, we are focusing on capturing a very small area- only the tusk!- and particularly the gentle pattern indented. So as long as you adjust your aperture and shutter speed, you can keep your image properly exposed. The sun’s natural light will capture the beauty of the ivory, and your low ISO will result in a gorgeous image, with little to no noise.

Good luck getting brilliant elephant tusk photos – and do share them with us!

“We admire elephants in part because they demonstrate what we consider the finest human traits: empathy, self-awareness, and social intelligence. But the way we treat them puts on display the very worst of human behavior.” – Graydon Carter