Is it Acceptable to Use Spotlighting During Photo Safaris?

Ethics in Photography Travel – Is it Acceptable to Use Spotlighting During Photo Safaris?

The Debate Around this Practise During Game Drives in Africa

During a photo safari in Africa, you might get the opportunity to go on a night drive; a game drive in the dark, when nocturnal animals wake up and predators are on the move. A night drive can be an exciting variation of daytime drives, and it can offer some interesting – though challenging – photographic opportunities. But spotting and photographing wildlife at night requires ‘spotlighting,’ a practice that is somewhat debated amongst wildlife photographers and safari guides. We explored the different sides of this debate.
Text by Marlena Conen, images by Sam Cox

Photo Safaris are on the Rise

With photography travel being a fast growing industry (though clearly this trend is temporarily interrupted by COVID-19), many keen photographers join photo safaris in Africa each year. It’s a great way to encounter an impressive range of animals and improve photography skills through guidance by a professional wildlife photographer. But as with all trips you embark on, it’s important to ensure that the photo safari you join operates in ethical ways, and causes no harm to the nature reserves you’re visiting and its many inhabitants.

A number of practises in African wildlife photography are debated, and one of these is spotlighting. In order to find animals in the dark, guides scan the bush with a bright white spotlight, hoping to catch the reflection from animals’ eyes. Once an animal is spotted, the light can be used to observe it and photograph it. This, according to many, can have some harmful effects.

It’s important to point out that night drives can be a thrilling experience. When you venture out into the African bush in the dark, you’ll have a chance to encounter nocturnal animals such as genets, aardvark, porcupines, bush babies and pangolins. You’ll also experience the bush at a time of day when many predators are at their most active, so you might witness big cats hunting, or you might encounter clan of hyenas on the move. It’s exciting, it’s vastly different from doing game drives during the daytime, and it might allow you to take some interesting night photography.

“I am a firm believer that everyone should have a night drive,” says Sam Cox, professional wildlife photography guide at the Wildlife Photography and Conservation Volunteer Project, based in South Africa’s Greater Kruger Area. “Once the sun goes down, a whole new side of Africa opens up. Noises change, adrenaline kicks in and this is what gets my heart going! All you see is what the spotlight is seeing.” 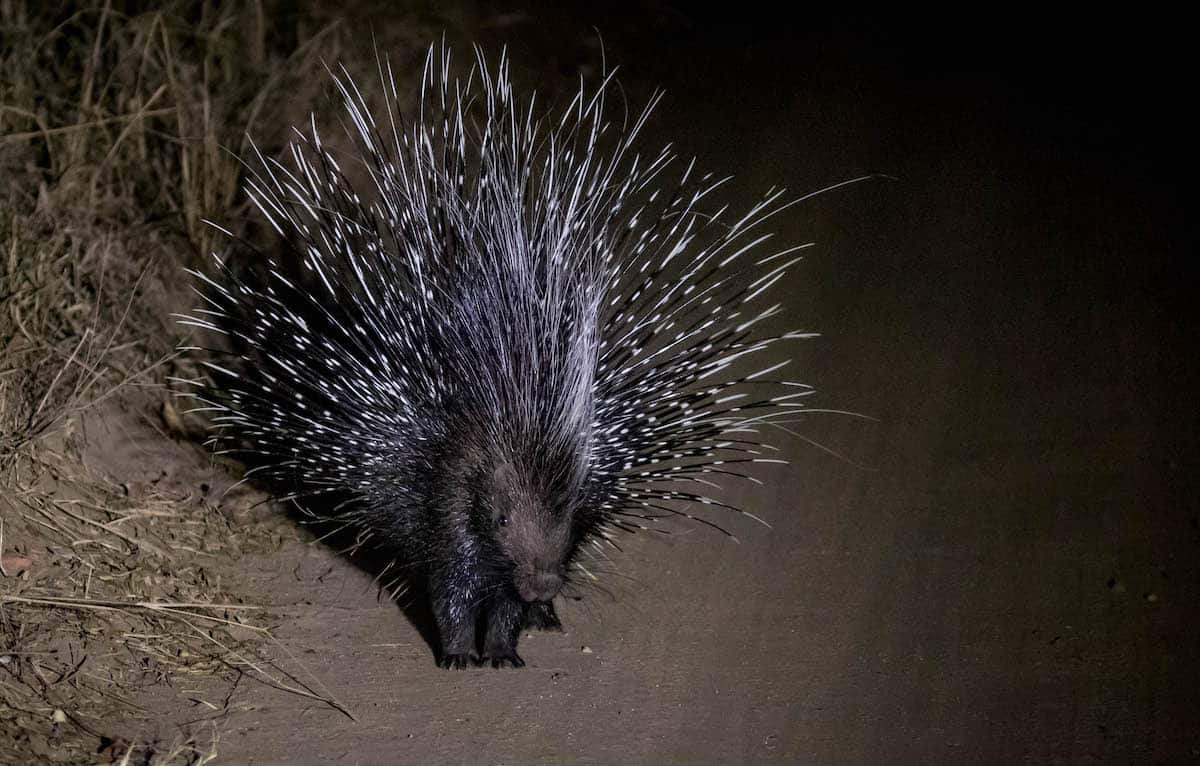 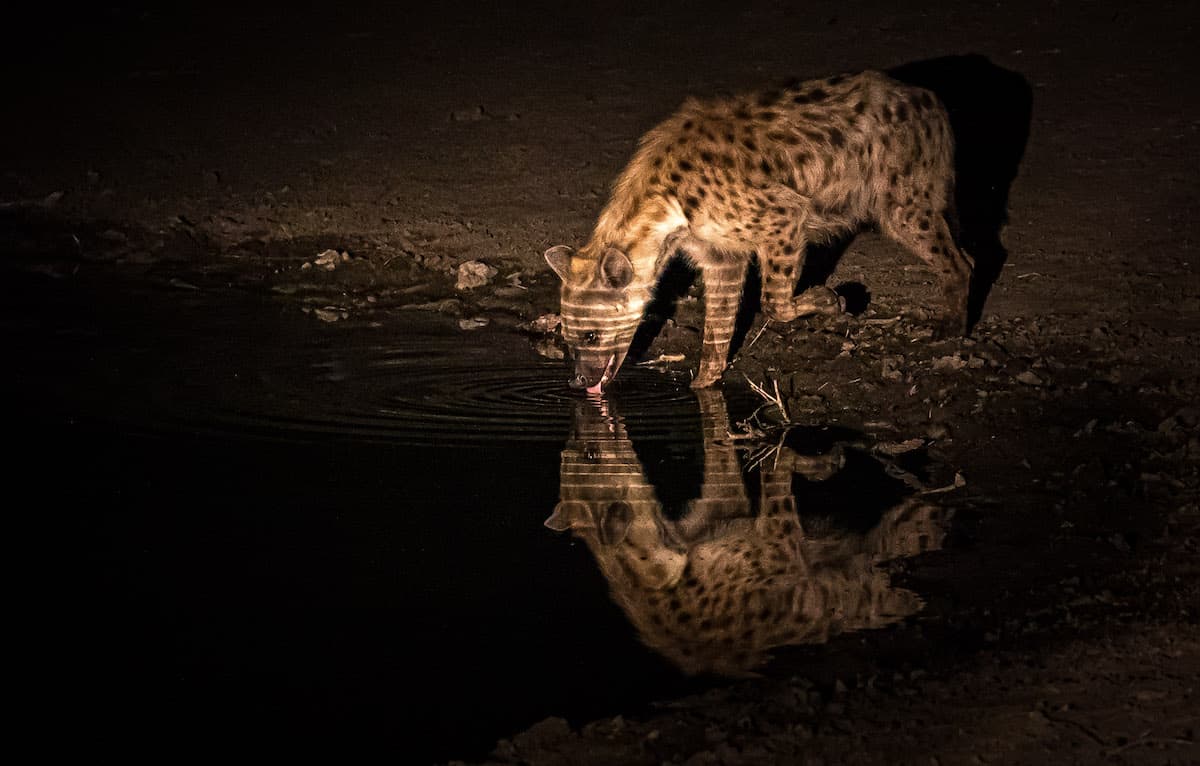 Animals to Avoid with the Spotlight

Alan Hewitt, a UK-based wildlife photographer, writer, and guide on our South African Photo Safari, agrees that certain animals should be avoided at all times with spotlights. “Elephants, rhino and hippo should never be illuminated, as they are known to react aggressively,” he explains. “Prey animals such as impala, gazelles, and topi are also avoided. They react with fear, and fleeing the area with potentially impaired eyesight may cause injury, separation from the herd and their offspring, or increased vulnerability to predation. Guides appear more willing to use spotlights on lions and leopards, with cautions on monitoring their reaction. It’s important to not directly shine onto their faces, to avoid cubs, and to not interfere during a hunt.”

The Importance of Being Sensitive to Circumstances and Animals’ Reactions

In addition, spotlighting needs to be done responsibly by reading the situation carefully, says Cox. “You should shine on the body, not directly the animal’s face. And guides should never interfere with or artificially orchestrate a hunt or another scenario that might benefit their clients. Always reading the animal’s behavior and leaving it to what they are doing. Plus, we never want to cause animals stress or fear for the sake of a photograph. So, the golden rule here is to just ask: What are you doing? Are you putting the animals first? If the answer is no, you need to correct your behavior. It is as simple as that.”

Stuart Quinn, lodge owner and guide in Botswana’s Tuli Block, agrees that spotlighting can affect hunting. “We have found that predators are impacted in their hunting success, because prey sees them, and their night vision is reduced,” he explains. “Prey species become dazed and confused with a direct light shone upon them and their chances of escape from predators are diminished. In addition, any animal shone upon is blinded and may become more at risk by attack from another competitor of the same species, particularly amongst competitive males. Unnecessary impact will cause stress on the animals and this certainly raises ethical issues.”

Should Spotlighting be regulated?

Spotlighting, then, needs to be approached in a sensitive way, with animals’ well-being in mind at all times. Putting strict guidelines in place, however, isn’t so clear-cut, says Cox, as it’s a multi-layered issue. “A regulation for spotlighting is difficult, as it is still all shades of grey,” he claims. “It requires training and reinforcement. People need procedures and schooling in how to identify animals and determine which animals to avoid with their spotlight. Developing and strengthening that sense for the safety of the animals is very important.”

Quinn agrees that the key to responsible spotlighting is for guides to be professionally trained, “so that they can differentiate different species very quickly and ensure that animals that are diurnal or more at risk are not unnecessarily shone upon. A person skilled in the use of the spotlight will know, for example, when to turn the light off or away from the animal quickly, when to turn off vehicle headlights, and how to use a spotlight sensibly to navigate through or past herds of diurnal animals – using the peripheral beam of the light to highlight animals. This is because the outer or peripheral beam is less bright that the main beam and has a lesser impact on the animal.” 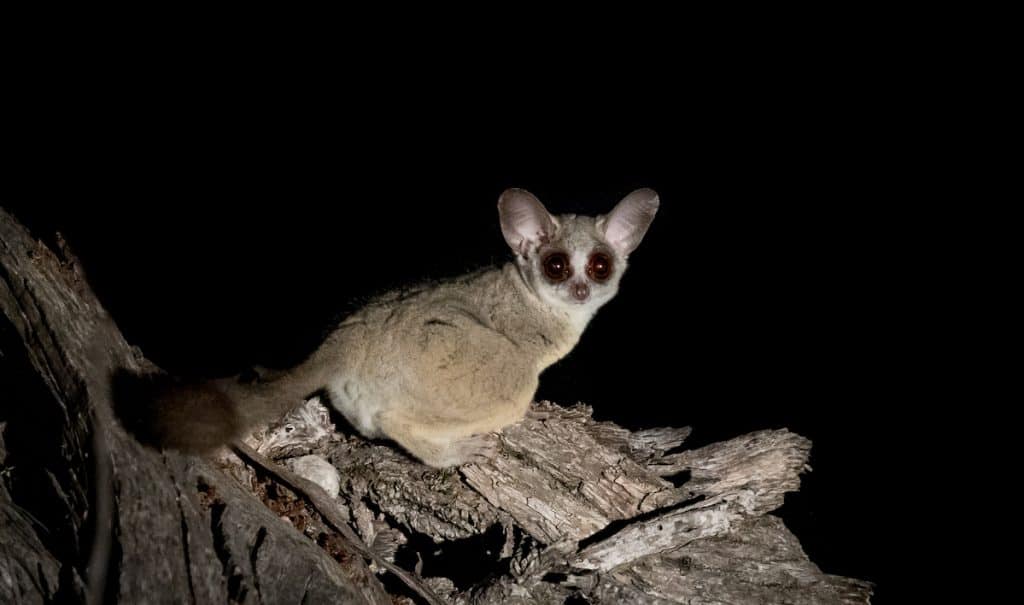 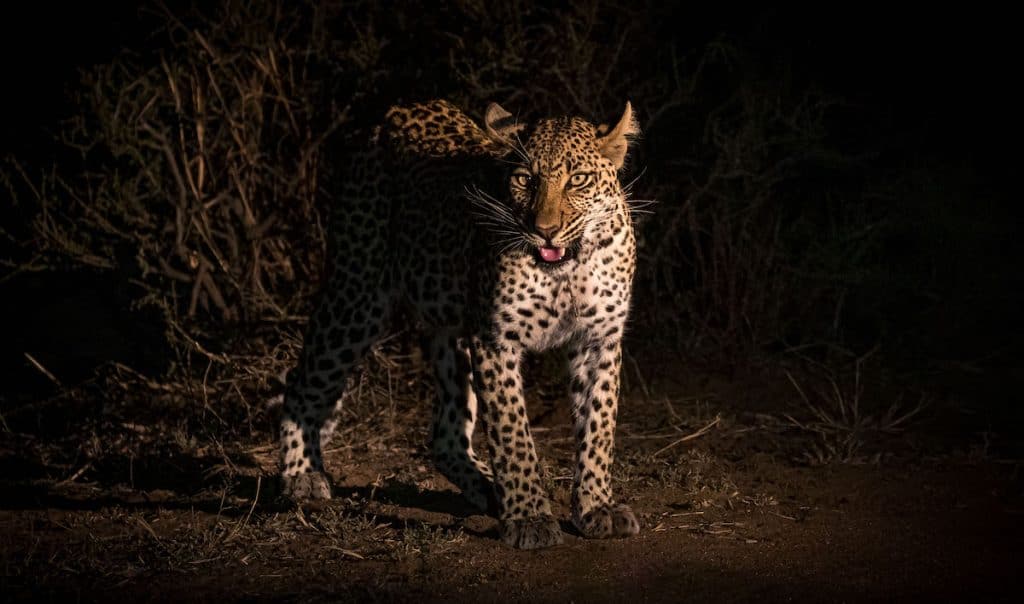 However, since national parks and game reserves all have their own geography, wildlife, and dynamics between animals and game drive vehicles, regulations for spotlighting might need to be unique for each place, as Quinn points out. “Spotlighting should definitely be regulated, but probably with different regulations within each region.”

Spotlighting can be done ethically, says Cox, and without compromising the well-being of wildlife, “as long as the priority always comes down to the animal itself. Because, in the end, it is our privilege to spend time with the animal.” However, this can be a challenge in an industry that is focused on making guests happy. Regulations to spotlighting, says Quinn, “will need to be reasonable so as to ensure that there is still a good guest experience. Without nocturnal animals being found and followed, there will be less guests visiting the areas for this part of the experience, and income from guests is the survival line of most commercial operations. And these, in turn, help fund the conservation of the areas where the animals reside.”

It’s all about balance, then, and carefully navigating the situation. “Spotlighting is a subject which I have found to be controversial and often divides opinion,” says Hewitt. “I appreciate both sides of the discussion and my own approach if spotlighting is being used is to be mindful of the ethical issues above and be led by a professionally qualified guide who is used to working with wildlife in their reserves.”

Ethics in Photography: A Blog Series

Photographs play an enormous role in shaping how we view the world. When we take and share photographs, we capture a moment and we tell a story. But as beholders, we don’t get to see the environment and the conditions under which a photograph was taken; we only see the end product. In our ‘Ethics in Photography’ blog series, we explore the various debates around how pictures are taken, any potential harm caused to our photographic subjects, and ways in which to mitigate issues.

Read Next: Ethics in Photography, The Bokaap Case