The Impact of Mass Tourism in a Cape Town Community

At Penda, we’re lucky to be based in Bo-Kaap, a community in the heart of Cape Town with a uniquely colourful and vibrant character. And a community that has undergone an unmissable development in recent years; it has experienced a drastic increase in mass tourism. But while Bo-Kaap now shows up in thousands of Instagram feeds, its residents are failing to benefit. – Text by Alice Goodridge, Pictures by Sarah Isaacs

Whilst the impact of tourism on local communities has been well researched in academia, there is much less information available about the impact of photography travel specifically. With photography tourism being a growing industry, and with smart phones drastically increasing the amount of pictures taken on any trip, it feels relevant to look at the implications of this. And as a photo travel organisation, we’re interested in exploring ethics in photography travel as much as we can. We want to know how companies such as ourselves can better serve the communities and environments that frequent our tour itineraries.

So it only made sense to look into the photography tourism phenomenon we witness on our own doorstep; in the Cape Town suburb of Bo-Kaap. Every day we see bus loads of camera-faced international tourists, filing out onto Bo-Kaaps narrow roads, to snap photographs of the highly-instagrammable, rainbow-coloured houses that populate the area. It’s undoubtedly a beautiful suburb and, as photographers, we understand the attraction. We’ve even featured Bo-Kaap in one of our own photography travel tours. However, when you are witness to the epic number of people who visit the area every day, you begin to wonder how the Bo-Kaap residents feel about the continued intrusion. What is the impact of photography travel on the community in Bo-Kaap? Hundreds of tourists come here every day to take photos – but what do they give back? 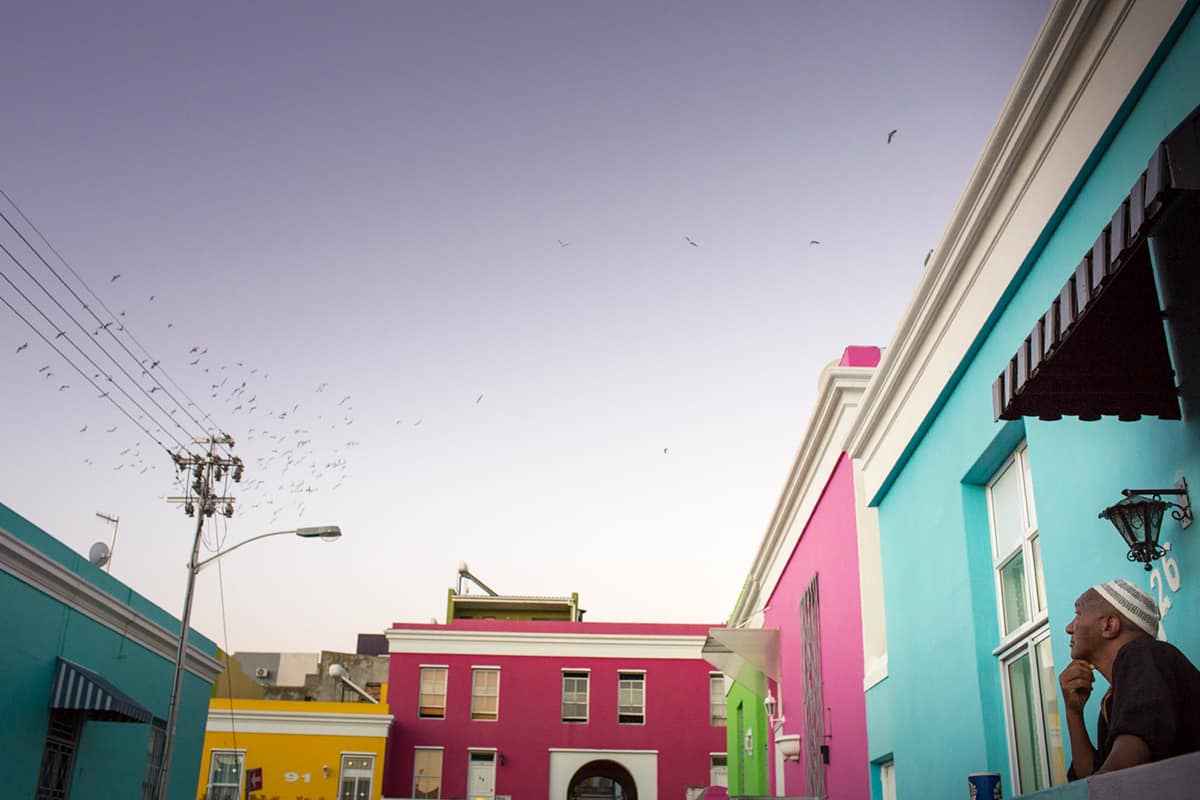 Recently, I spoke with Bo-Kaap resident and entrepreneur Shakirah Dramat, who kindly agreed to meet with me to discuss the impact of photography travel on her community. I came across Shakirah’s name when I was researching Bo-Kaap in regards to a video she made last year. In this video she expressed her frustrations about the dramatically increasing amount of tourism in the area. “I will never forget how I felt the day I made that video,” she told me. “I was so livid.”

Bo-Kaap certainly is a honey pot for instagrammers and, in the age of geotagging, one beautiful instagram photo from an influencer can result in hundreds of followers swarming to the same spot, looking to re-create that perfect shot.

Just a couple of days before I met with Shakirah, one of my colleagues had snapped a quick photo of a blue car in front of a green house in Bo-Kaap as we were on our way to get coffee before work. Later that day, another colleague posted an almost identical photograph on Instagram of that very same car. I found this quite amusing at the time but it wasn’t particularly surprising; it was just down the street from our office and the colours were stunning. What I didn’t realise, until Shakirah breached the topic, is that these were only two of thousands of photographs on Instagram of the car, which belongs to her friend.

“I get so frustrated because people are literally sitting and standing on his car, they’re opening the doors, they’re scratching it every day and nobody considers that kind of stuff. Thousands of people must have touched that car in the last year alone and that’s damage – that’s wear and tear that tourists don’t think about. That’s just one example of how this kind of thing affects everyone in the community. You could say the same about people climbing on people’s houses, people climbing on their walls, touching their doors.” 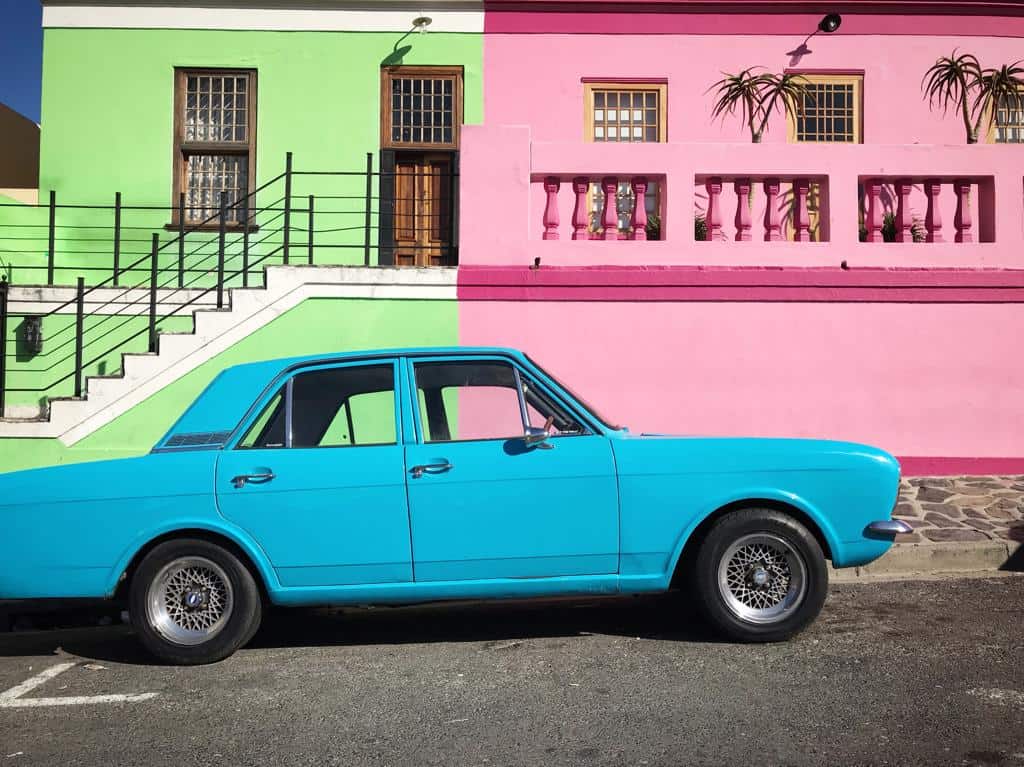 Bo-kaap isn’t the only colourfully painted neighbourhood that’s subject to this level of attention. Earlier this year, The Telegraph published an article written by Greg Dickson, investigating the “damaging rise of the ‘Insta-tourist”. In this piece, Dickson discusses the experience of the residents of Rue Crémieux, “one of Paris’s most romantic streets.” He explains that “more than 31,000 have posted on Instagram with #ruecremieux tagged” and “thousands more have geotagged the street so that people can locate it on a map at the click of a button.”

He tells the experience of one resident, Antoine, who stated that the street has consequently ‘turned to hell’ for the people who live there. He says that at weekends there are often two hundred people outside of his windows. In response to this he puts up barricade tape and is trying to get the street closed in the evenings and on weekends.

Shakirah paints a similar picture of her family’s day-to-day in Bo-Kaap; “We actually had to put a gate over our house. There’s literally a bar because people were just sitting on our stoop all the time. No one thinks about the way that it inconveniences us. Now we have to constantly keep our doors closed, constantly keep our curtains closed.”

Getting Photographed Without Consent

Shakirah also told me a rather disconcerting story about the experience of another Muslim woman in the community; “She lives in the community and is a Muslim woman who, for religious reasons, always covers herself with a scarf. She doesn’t want to be seen uncovered. And she was telling me how she was in her house with the door ajar whilst she was sweeping, and a tourist took a photo of her. She wasn’t wearing her scarf and she felt so violated by that. That kind of thing, that’s not okay. When you think of it in the context of religion and what that now means for her, that’s a huge deal. There are just so many things people don’t consider.’ 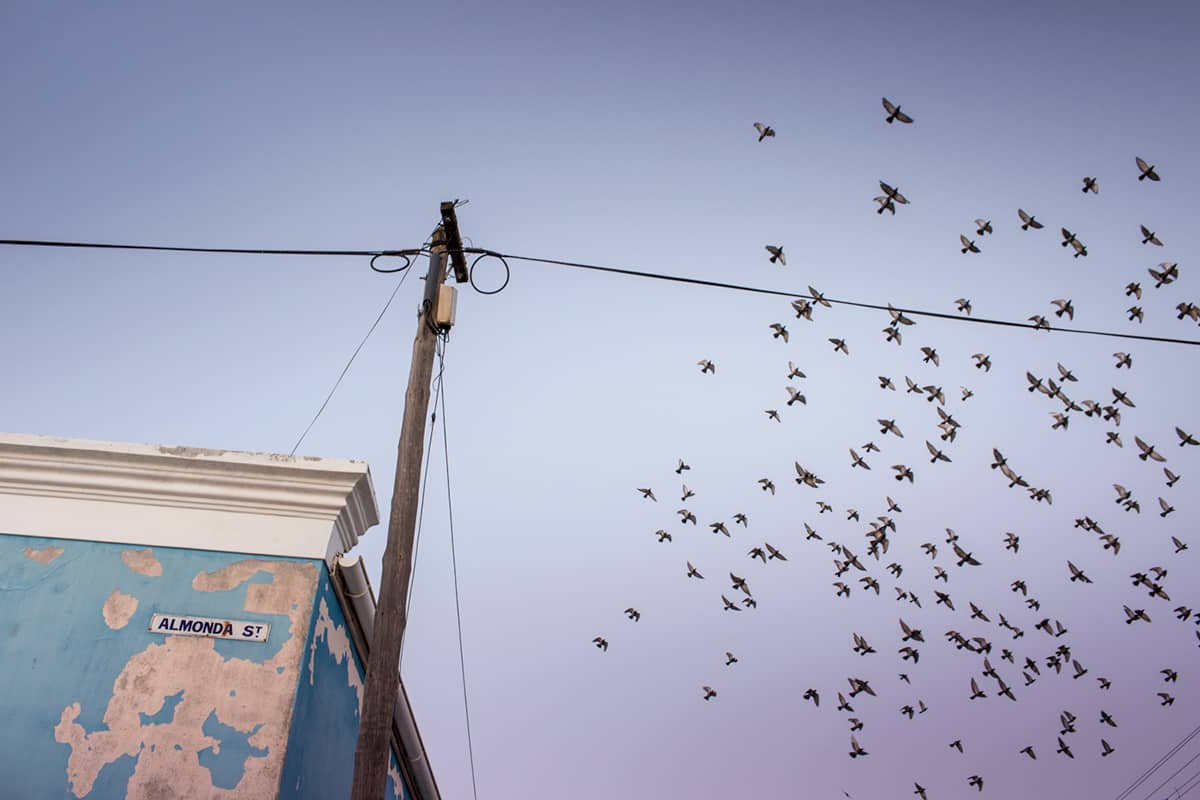 The Erosion of Bo-Kaap’s Heritage

This lack of consideration and respect seems to be the basis of most of Shakirah’s frustrations about photo-tourism in the area – and not only in regards to respecting individuals. She also expressed her frustration at the lack of acknowledgment of and respect for Bo-Kaap’s history, heritage and culture. “You would think that photo-tourism is spreading the story of who we are and how the Cape Malay people got to Cape Town and what we’ve contributed to the history of this country,” she said. “But it’s actually eradicating our heritage, because all we’re becoming is the number one instagrammable place in Cape Town; we’re not anything else. Nobody cares about our history, heritage, stories and traditions. For me really, what the pictures do is take all of that away – it takes away all of the beauty, all of the struggle, all of the triumph.”

The people of Bo-Kaap are mostly descendants of slaves. These people were brought to the Cape from Asian countries such as Malaysia and Indonesia, as well as from other African countries, by the Dutch to work ‘jobs’ which required already skilled and educated people. The coloured houses we see today were previously white and rented to these slaves by their owners. The area became known as ‘The Malay Quarter’ and the people ‘Cape Malay’ despite the mix of their roots. After they were emancipated from slavery, the Cape Malay people were given the opportunity to buy the properties and, in expression of their freedom, painted them in the vibrant colours we see today. In reflection of the roots of many people who live there, the neighbourhood is predominantly Muslim and is the home of Cape Town’s first mosque.

Bo-Kaap is an area with very real and current struggles. The gentrification of Bo-Kaap is negatively affecting many of the families who have lived there for decades. Wealthy people from outside of the community, namely Europeans, are willing to pay a good sum of money to live in the picturesque area. This raises the value of the properties which, in turn, raises the rates that the current residents have to pay to a height that is completely out of their means.

‘Because the value of our property has gone up so much,” Shakirah explains, “people can’t afford to pay their rates so they end up in debt to the city and are forced to move and what can you do? Maybe you’re a pensioner, maybe your kids are working minimum wage jobs and so you’re forced to sell. And a lot of people ask why everyone is selling if they don’t want to leave and it’s because the conditions are – I mean, it might not be actual forced removals like we had in apartheid when governments said ‘you have to go out because we’re going to bulldoze your house now’, but it’s kind of the same concept in the sense that people don’t really have a choice. A lot of them are helpless. What else can they do?”

She also explained to me that beyond the streets of Wale, Rose and Chiappini (an area she refers to as the ‘two street threshold’ that tourists never venture beyond) “people don’t have jobs, people don’t have food. You can find a few dozen people in two-bedroom governmental apartments that were given to their families generations before” This is certainly a side of Bo-Kaap that is never seen on Instagram. 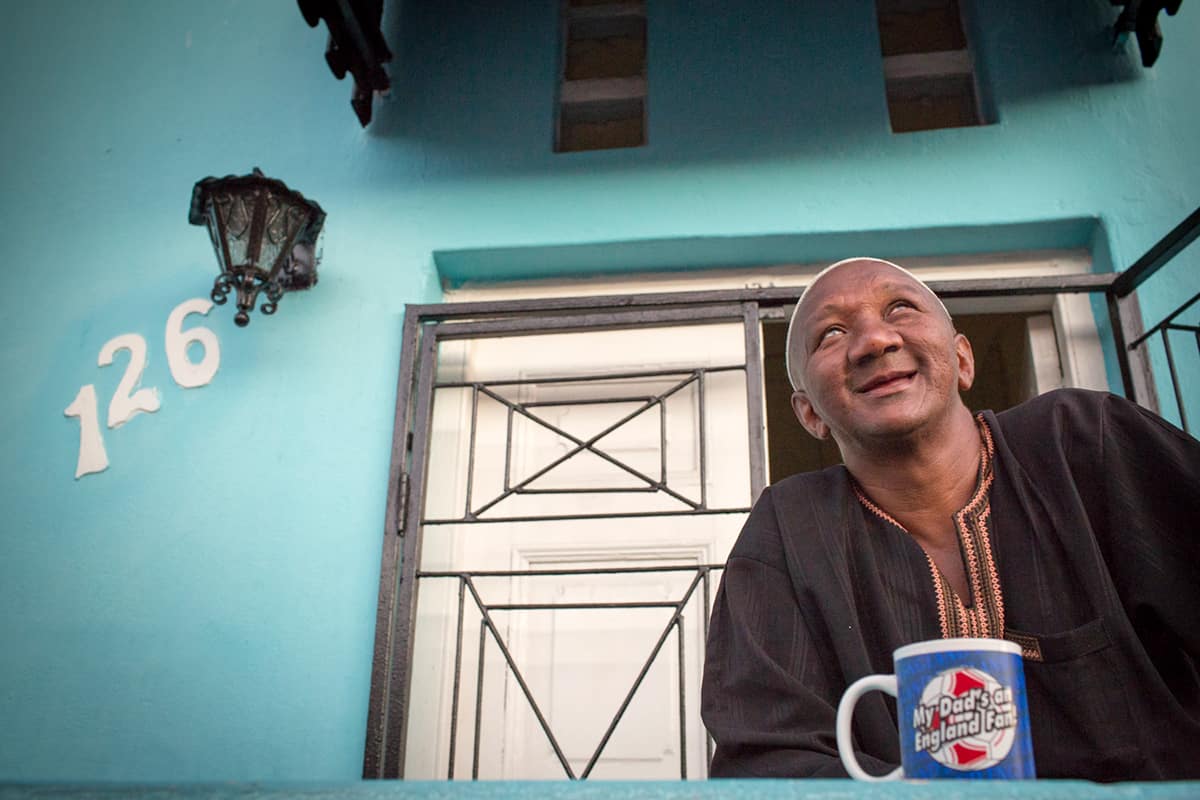 However, it’s not only the struggles of Bo-Kaap that remain unseen. Shakirah is also passionate about sharing the beauty of her culture and community which she describes as “a physical representation of how I became African – of how I’m allowed to feel at home, safe and honoured to be a part of this really amazing country. Even with the bullshit. It represents so much more than what most people go there for.”

Recently, Shakirah began a project titled ‘Stories of Bo-Kaap,’ through which she hopes to empower the community to share the stories of their lives, heritage and culture; the authentic stories that remain unexposed beneath the veneer of colour. These will be the stories of every day people; the food they make, the clothes they wear, the occasions they celebrate, what their day-to-day looks like.

She’d like to document these stories using photography and videography, but she’s also interested in up-skilling people within her community to become tour guides; to lead small tours that would introduce people to Bo-Kaap residents and offer them an insight into their lives. They would offer people the chance to learn about Bo-Kaap from people who really know and care about the community, in opposition to the pit-stop style tours that are commonplace today. The employment of local tour guides would also ensure that the community would financially benefit from the tourism, which generally isn’t the case at the moment – an uncomfortable reality.

When I asked Shakirah what else she felt would lessen the negative impact of photo-tourism in Bo-Kaap, she said, “I think it’s mostly about people being mindful. It’s just about being aware.” She also emphasised the importance of researching Bo-Kaap before you visit in order to better understand the area’s history and the culture of its people. Bo-Kaap is a place of intricacies and complexities and she feels that people should acknowledge this when taking photographs. “I’m not saying don’t take pictures, because it’s a beautiful place. It deserves to be known and it deserves to be recognised, but it’s beautiful for more than just the colours.”

To learn more about Bo-Kaap you can visit the local museum’s website or, better yet, chat to a local!

To see more of Sarah Isaac’s beautiful photography you can visit her portfolio.

And if you’d like to venture to Cape Town to experience this stunning place – and to give back to its communities – join us this October on a photography volunteer program!